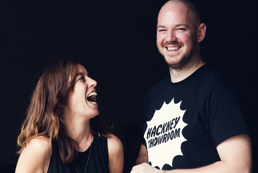 So far, 2017 has been a year of protest: against Donald Trump, abortion bans, controversial speakers at universities, violence towards women, immigration – whichever side you fall on, the public are more engaged than they have been in recent years.

While some protests have been violent and some peaceful, many people are now trying to figure out how they would like to utilise their freshly galvanised political passion. “Can joy or beauty be ways of protesting rather than everything being painful or angry all the time?” asks Sam Curtis Lindsay.
The co-director of Hackney Showroom is in the final throes of preparing for Joy & Dissent, a festival of cultural activism due to open on March 27.

The festival, curated alongside choreographer and performer Malik Nashad Sharpe is based on “the idea that we could have a real good laugh and kind of be playful and beautiful and joyful as a way to say ‘you will not crush us’”.

Bringing together a huge range of material covering clowning, spoken word, poetry, comedy, music, dance and even wrestling, the festival is celebrating the venue’s second birthday.

“Last year when we had our party, we ended up having a pretty bonkers one and we ended up being gatecrashed by James McAvoy and Kit Harrington,” says Lindsay. “They just rocked up! So that could happen again, that was really fun and a bit naughty.”

Set up “on a shoestring” by Lindsay, a director and actor, and Nina Lyndon, who previously ran the Young Writers Programme at the Royal Court theatre, the Showroom is less of a traditional theatre and more of a “cultural arts centre”, says Lindsay.

“It puts the artists at the centre of what we do. We’re not trying to replicate an existing theatre. It’s been tough in the sense that we’re pitting ourselves against other organisations and comparing ourselves. We’ve really had to hold our nerve and make sure that what comes through is really brilliant quality, which means we’ve taken a bit longer to develop our audience.

“I feel like we’ve become a place for experimenters and risk takers to try something out, with the view that we’ll always do it with the highest quality production value we can. It doesn’t feel like a fringe theatre.”

One of the artists to come to work with them on the festival is Travis Alabanza, a trans performer, writer and poet. Their show, BURGERZ, is a response to their experience of having a burger thrown at them on Waterloo Bridge. Using live theatrics, poetry and digital imagery, they ask: What does the trans body have to do in order to survive?

“At what point do you become active in protection and the calling out of transphobia, or any kind of discrimination and abuse?” says Lindsay of Alabanza’s work. “When do you stop being a silent bystander and take action? It’s done through humour and recounting those moments – it’s got a beautiful, joyful quality but it’s asking people serious questions about what it means to be an observer and to think about how you can become an ally.”

The name of the festival, Joy & Dissent, came from a piece by co-curator Malik Nashad Sharpe called Sad King, which he is performing on April 8.

Lindsay hopes that the range of shows is enough for everyone to find something to enjoy. He says that they don’t want it to feel like “high art” or “alienating”. Making sure that it stays affordable is important so people feel open to taking risks on what they go to see.

There certainly will be things that you haven’t seen before.

Alongside this, there is also more traditional format comedy from two Funny Women award winners, Jayde Adams and Gabby Best, who make up a stand-up double bill, and “pull on their experience of fighting against a very male dominated comedy world”.

Two Shorts series present a gala-like close to the festival.

“It really ranges from office politics to radical drag king smashing the patriarchy,” says Lindsay. “It’s a real experiment.There’s a chance to dip your toes into lots of different stuff.”

Hackney Showroom isn’t a funded organisation and they hope that, with a bit more support, they’ll be able to put on more of their own productions. At the moment, they’re asking people to buy the venue new chairs.

“We’ve just got funding to do our first play, which is an incredible story,” says Curtis. “It’s a drag story. It’s a raucous political Weimar inspired piece. It really interrogates the difference between the art form and the audience.”

They are also in the process of developing a play with the National Theatre and Fresh Meat actor Zawe Ashton, and a second drag-themed show.